The aim of hearts is to end with the lowest amount of points by giving points to other players using heart cards. This guide will show you the basic rules of hearts and how the game works.

At the beginning of each game, you will be given a set of cards and will have the opportunity to give away 3 of your cards to another player and receive 3 back.

The game always starts with the player who has 2 of Clubs. Players will then have to play Clubs for that turn. Whoever played the highest card, that turn decides which suit they would like to play next. The game continues in this manner until all cards are played.

Be noted that Hearts CANNOT be played until they have been “broken,” which will be explained later.

This shows a set of cards, which are placed in order of “power.” So it goes Hearts > Spades > Diamonds > Clubs. Heart cards give 1 point each while the rest give no points, with one key exception.

The Queen of Spades is worth 13 points and is the most valuable card in the game! The best time to use this card is when someone has played an Ace or King of Spades and will therefore get the 13 points.

Another good tactic is to get rid of your Clubs early on, and then play this card when someone next plays Clubs. This way, the person with the highest Club will gain the points instead of you.

This symbol represents that Hearts have been “broken” and points are now being given. This occurs when someone plays a suit that someone else may not have, and this person has decided to play a Heart instead.

At this point, anyone can now play Hearts provided that they do not have any cards left of a suit that has been played. Someone can also play the Queen of Spades to break Hearts.

HOW POINTS ARE AWARDED:

One thing that may be confusing is how points are awarded when certain cards are played. Here, I will try to explain it using an example. 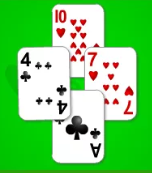 In this scenario, the 10 of Hearts was played first. This means that the highest Heart card played will incur points. The fact that an Ace of Clubs was played does not matter, as that was NOT the suit the turn started with.

An alternative way to win is to gain all 26 points and “shoot the moon.” This will result in you having 0 points and the other players having 26. This is a risky move, as someone else getting just one point can stop you.

In order to shoot, it is recommended that you keep higher cards until the end and get rid of Heart cards quickly so you can keep control of the game.